My Boyfriend is a Bear by Pamela Ribon & Cat Farris

My Boyfriend is a Bear is a graphic novel by author Pamela Ribon and illustrator Cat Farris, published by Oni Press.

Nora hasn’t had the best luck with boyfriends; they’re still in love with their ex, have turned out to be liars or worse (didn’t like her cat). During her most recent disastrous camping date, she’d marched off into the woods to bury the magazines she’d just been shamed for reading and been terrified by a giant American black bear.

After that, she decided it was time to dump the boyfriend and get back to being herself. She goes out on the town with her two best girlfriends, and after one too many drinks, she returns home to find the American black bear rooting through her rubbish bins. In her merry state, and with the bear holding what appeared to be one of the magazines she abandoned in the woods, she thinks the bear remembers her, so she lets him into her house. They bond over junk food and Nora falls asleep in the biggest bear hug she could’ve possibly imagined.

There are the inevitable hiccups in their relationship. Cat versus Bear is a brief war of personalities, quite a few of her possessions get smashed and yes, there are a few days during the month where they have to sleep in separate bedrooms for safety reasons but overall, through thought and care, they overcome their differences. But can they survive the call of the wild and the change of the seasons together? 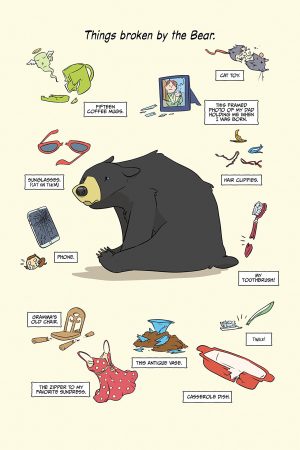 My Boyfriend is a Bear is simply one of the cutest books I’ve ever read in my life. Don’t ruin it for yourself by getting hung up on the details of how or why, it just is, and it’s wonderful. Not only is a bit of a heart-warmer; this story also had me laugh out loud. The illustration style suits the story perfectly and if the idea of an American black bear in cut-off denim hotpants doesn’t make you grin, then there’s something wrong with you.

So what’s even better than discovering an incredible story? Learning that it’s going to available in more than one format! Legendary Entertainment (the company behind Detective Pikachu and Godzilla: King of the Monsters) has bought the movie rights to My Boyfriend is a Bear, so hopefully, we’ll see it on screens in the not too distant future.

As you can probably tell from my early reviews, I’m usually more swayed towards darker themes in my books, but there’s an exception to every rule. If you’re looking for a last-minute gift to make someone special smile this Christmas, please look no further because this is simply perfect. Funny, beautiful, charming and genuinely unique, My Boyfriend the Bear has snuck in at the final hurdle to become one of my favourite books of the year. There simply aren’t enough positive words I can use for it. Treat someone else or treat yourself, either way, this graphic novel will be spreading smiles wherever it’s found.

If you like this, you’ll love The Truth Pixie by Matt Haig