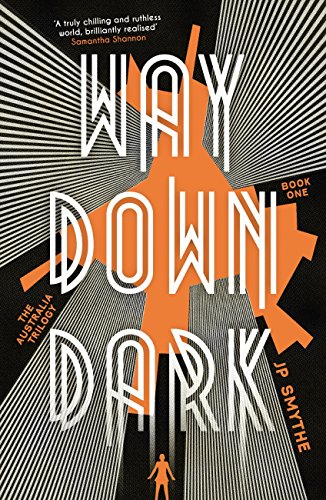 Way Down Dark is the first young adult novel from the author JP Smythe, otherwise known as James Smythe. He has previously written six adult novels including The Testimony and The Machine.

As Chan looks over the deteriorating body of the terminally ill mother, she steadies her shaking hands and remembers eveything her and her mother planned….then plunges the knife into her chest.

Chan ends her mother’s life in full view of the rest of the ship, the other residents of the vessel known as Australia have to respect her as they did her fearless mother or the gangs would take everything she had. She may live on the ‘free’ half of the craft but the gangs were always watching, waiting for weakness and as she sets light to her mother’s body the first gang makes their move.

Using her mother’s tricks and her own ingenuity she survives the everyday battles of living aboard Australia, but as she watches the gang known as the Lows pick on the weak and vulnerable she jumps to their defence. As she helps more and more people she makes herself a target and as the true war breaks out between the Lows and the free, she finds herself right in the middle of it, discovering secrets about Australia that she could never have dreamed.

James Smythe’s back catalogue includes some of my favourite novels of all time so I was excited to hear he was delving into the world of YA. As with his adult novels, JP Smythe brings together great characters and an exciting setting to create an imaginative and completely captivating novel. Chan is mature for her age when it come to survival but having grown up knowing who is good and who is bad, when those lines blur her naivety shows and her need to believe in the best in people wins.

As well as Chan’s battles within the ship, it is also the secrets of Australia that makes Way Down Dark such a page turner. So many lies are unearthed within this first novel you cannot help but be caught up in desperately wanting to know what it all means. Being the first in a trilogy Smythe leaves you with a storyline to lead into the follow-up but also manages to take you on such a great journey that you won’t feel let down at how it finishes., making it a complete story in it’s own right.

Buy your copy of Way Down Dark from Amazon  here.