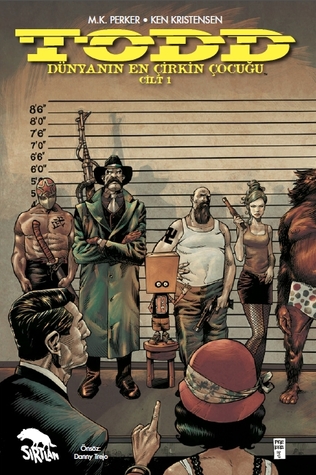 Todd The Ugliest Kid On Earth Volume 1 by Ken Kristensen and M.K. Perker

Meet Todd, a child so ugly his parents keep a paper bag over his head. When the latest killer on the streets corners Todd on his own, outside his house it looks like fun time is over but when the killer removes the bag he just can’t bear to kill such an ugly child.

Todd’s luck runs out here and after a mix up with some sticky dolls he ends up incarcerated for the grizzly murders of children in his town. Being the naive little sweetheart he is he doesn’t quite understand his predicament but tries to settle in and ends up making friends in the prison showers (no, he really does!).

While Todd’s locked up behind bars the child killer’s still on the loose to behead pretty little children and his parents get into all sorts of mischief, especially his mother as she tries to pull together the money to bail him out.

Todd, The Ugliest Kid On Earth is drawn by well known comic book artist M.K. Perker (Air) and debut writer Ken Kristensen and although their experience may be varied their talents work really well together. Perker captures character traits in single images and Kristensen carves them out, pumping them with darkness, humour and innocence. Todd himself is hugely likeable in his naivety and the other characters are all perfectly insane to keep you wanting more. I will definitely be keeping my eye out for Volume 2.