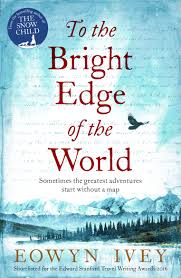 To the Bright Edge of the World by Eowyn Ivery

To the Bright Edge of the World is the second novel from the author of The Snow Child, Eowyn Ivey. Do I really need to say any more?

1884, the newly married Lieut. Col. Allen Forrester agrees to lead an expedition to the mostly uncharted Wolverine River in Alaska. After reports of a Russian team being brutally murdered in the area by local tribesmen the land had been left unexplored, until now.

Allen’s wife Sophie is nervous and excited about her husband’s venture but unlike many of the women she is surrounded by, she is also incredibly jealous. Her passion for nature, especially bird life, leaves her envious of all the wonders he will see. When she discovers she is allowed to join him for the beginning of his adventure, not even the scaremongering of her female friends can put a dampener on her excitement.

There’s only one thing in the world that would stop her going, something they had almost given up hoping for but when Sophie discovers she’s pregnant, her plans have to be cancelled. Both happy and a little disappointed Sophie waves her husband off to his travels. Nervous both for his trip and for the pregnancy she faces alone.

Neither Sophie or Allen’s life-changing journeys go to plan and although they never leave each others thoughts they face their hardships alone. Although there may be one thing that unites them across the seas…a withered old man that the locals both fear and respect, one they rumour can turn himself into a bird.

Eowyn Ivey captures the wonder and beauty of Alaska in To the Bright Edge of the World just as she did in The Snow Child. After just a handful of pages, if you’re not desperate to grab your gloves and jump on the first plane to the frozen state then there is most definitely something wrong with you.

From the official blurb, you may think it is Allen’s character that dominates the tale but it’s a roughly even split between him and his wife. Although I feel terrible having favourites (because Allen is a true gent), it was Sophie who won my heart. A vibrant, forward-thinking survivor, Sophie suffers a terrible fate but strives to push on forward and not just cope but improve herself in ways that most women of the time would not even consider.

The novel is set out as a mix of letters, diaries and artefacts, allowing Eowyn Ivey to show off her research skills and document the many truths in her fiction. Best described as historical fiction, To the Bright Edge of the World is not only a look at the mapping of  Alaska but also at the rich mythology that springs from that area. Keep your eyes peeled for the story of the geese women, one of my personal favourites.

To the Bright Edge of the World is a touching novel of self-discovery, wonder and history. Fact or fiction, the two meld beautifully to completely transport you. Eowyn Ivey wrote one of my favourite novels of all time with The Snow Child and this incredible second novel solidifies her as a novelist that you do not want to miss.