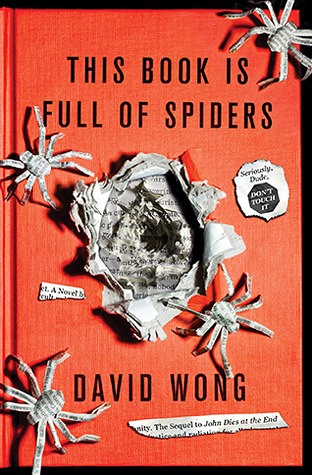 This Book is Full of Spiders by David Wong

This Book is Full of Spiders is the sequel to David Wong’s cult debut novel, John Dies At the End.

David and John are best friends and after a little experimentation with a black gooey drug, they’re both permanently left with the ability to see the everyday monsters that most of us can’t.

One day, when David wakes up to find a large, spider-like creature attacking him in his bed, he fights the beast off and traps it under a washing basket. When a police officer shows up, responding to a disturbance call and David answers the door covered in blood, he insists on coming inside. When the officer looks right at the washing basket with no reaction at all, David realises that he really can’t see the spider-like monster. As David’s friend John arrives, the officer leaves but as they’re about to wave him goodbye, they see the spider crawl around the officer’s shoulder and scramble into his mouth. The officer fits and the guys jump into his car and drive him to hospital. They order the medics to check his throat then run from the hospital, convinced they’ll end up in even more trouble. Soon the sound of screams and gunshots fill the air and they run back to the hospital to see what’s happened. There they see the officer come tearing out of the hospital, drenched in blood and shot numerous time but he’s turned and bullets can’t stop him now…the outbreak had begun.

This Book is Full of Spiders is a brilliantly fun yet disturbing on a number of different levels. Due to my ridiculous yet utterly crippling fear of spiders, this book had parts that literally sent shivers down my spine. One of these being a scene where the character John is attacked by a spider the size of a garage door. The other unnerving side to it is the realistically logical steps that are carried out to quarantine the town after the infection. The attempted segregation, control and panic are all tinged with humour from the characters points of view but feel completely possible as an overall reaction. When it’s not being creepy, this novel is fun, sarcastic and addictive. Imagine Jay and Silent Bob crossed with The Walking Dead…then add spiders. Which all adds up to scarily good fun!

Buy This Book is Full of Spiders by David Wong