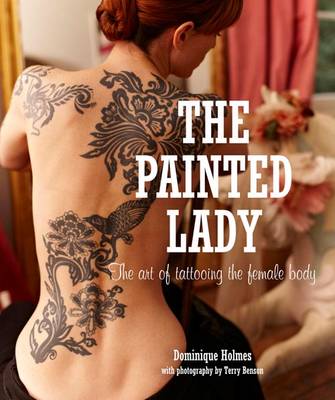 The Painted Lady by Dominique Holmes

Dominique Holmes is an artist that started tattooing back in 2002. Since then she’s worked at a number of UK studios but she found her home at the world famous The Family Business in 2007 and has been there ever since. Not only is Dom an exceptionally talented tattooist, she has now spread her wings into the literary world.

The Painted Lady investigates and celebrates the world of women and tattoos. Long gone are the days where women had two main choices, a small hidden tattoo or becoming an original ‘painted lady.’ These heavily tattooed women were displayed as sideshow attractions, along with conjoined twins and lion tamers. Thank goodness times have changed! Dom’s fascinating introduction not only gives a brief yet informative insight into the origins of tattooing but how tattoos have changed both for and because of women. As women’s rights have become stronger, education has been longer and travels have gone wider, it is only natural that we’ve taken control of our appearance. It seems a logical step that the styles women are most drawn to are flowers and symbolic patterns that have been used to beautify women for numerous generations across the entire world.

The Painted Lady then focuses on certain styles of tattoos and their most popular symbols. Themes include Vintage, Nautical, Butterflies and Flowers, Japanese, Mehndi and Fusion. Dominique’s passion for tattooing shines brightly throughout her writing and her passionate yet informative style is immensely easy and enjoyable tor read. I have been a tattoo lover for well over ten years now and this book still have numerous things to teach me, mainly in the origins of the nautical style. For example:

“Tattoos of naked, nautical-style pin-up girls became hugely popular among young American men in the early 1900s, when the United States government prohibited anyone with an obscene tattoo from joining the navy. Suddenly it became an easy way to escape the fate of having to serve – an option that many men took.”

The book also includes images and quotes from the owners of some of Dom’s favourite tattoos. Many are steeped in symbolism, especially when it comes to the loss of a loved one but it is refreshing to see her embrace the simple love of a design as well. The origins of tattoos may have represented certain journeys, both mental and physical but it is impossible to ignore many simply love their tattoos for their aesthetics and why not?

Informative, beautiful, tactile and a joy to read, this book makes a fabulous edition to any bookshelf, whether it belongs to a tattooist, tattoo collector or simply a curious mind.