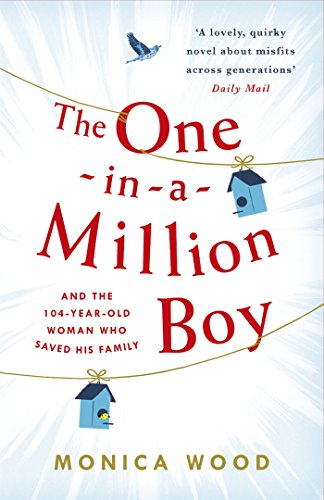 The One-In-A-Million Boy by Monica Wood

104-year-old Miss Ona Vitkus is on a mission, all thanks to the eleven-year-old boy scout that helps her with household chores every weekend. Quickly finding his obsessive passion for world records contagious and after some intense research, they decide that Ona has the chance to break some records of her own. As they put their plans into action she discovers a new lease on life, for the first time in years she feels like someone is truly seeing her.

A weekend passes and the boy never arrives, a week later and a grown man appears in his place. The boy’s father, Quinn, carries the sad news of the young boy’s unexpected death. With him he also brings the guilt of being an absent father, a father scared and confused by his son’s behaviour, a father who knows he could and should have done better. Together they both try to do right by the young boy that changed their lives.

The One-In-A-Million Boy by Monica Wood makes the heart-breaking move of killing off one of the most lovable young characters in modern fiction very early on. For a moment you wonder if the book will recover from losing such a unique character but then you meet Quinn. Drenched in guilt and desperate to complete his son’s work his past is as infuriating as his attempts at redemption are heart-warming.

Together, Quinn and Ona make an unlikely duo but an incredible team in a novel that will be adored by fans of Rachel Joyce. Extraordinarily moving and packed with incredible characters The One-In-A-Million Boy by Monica Wood is a wondrous tale of friendship and redemption that I can’t recommend highly enough. Don’t miss this one, it’s going to be huge!