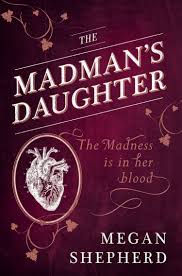 The Madman’s Daughter by Megan Shepherd

The Madman’s Daughter is Megan Shepherd’s debut novel aimed at young adults. This novel is the first in a trilogy that will follow Juliet through stories inspired by Doctor Jekyll and Mr Hyde and Frankenstein as well as The Island of Doctor Moreau.

Juliet Moreau was born into a privileged family, with the highly regarded Doctor Moreau as a father she leads a carefree life. But her world was shattered when rumours of unethical operations and strange vivisection tainted her father’s reputation. Soon he was hounded out of London, leaving Juliet and her mother to fend for themselves and when her mother passed away, Juliet was left alone in the world to fend for herself. Gone was her life of high fashion and elegance, her new life involved sleeping in a room with a number of other girls and cleaning the medical theatres of Kings College to pay her way.

One night she comes across some students conducting a horrendous vivisection and there she finds paperwork that she knows for certain comes from her father. She follows the paper trail that leads back to a childhood friend she thought was dead, who holds the secrets of her father’s whereabouts.

A long and treacherous boat ride later and Juliet finds her father alive and well, living on his own island. The strange, Neanderthal natives that live there leave her unnerved but not scared. Only when she finds out the truth about her father does she really know what fear is. But his blood runs in her veins so can she really be sure that the madness that pushes him, isn’t also alive and well in her?

This modern re-telling and alternate perspective of The Island of Doctor Moreau is aimed at adults looking for some very light-hearted entertainment. The plot jumps along at an engrossing pace and there are some brilliantly tense scenes set on the island when Juliet is being hunted. The first half of the book does suffer from some jarring repetition along the ‘I wanted to rip off my corset’ lines and there are a few sentences that I struggled to find any meaning in. For example ‘The thrill made my blood flow backwards.’ which I have no idea if that is good or bad. While most young adults novels pride themselves on incredibly strong female characters, I found Juliet a tad lacking. At one point she is literally running for her life, bumps into one of the love interests and is instantly overcome with girlish flirting. I think this novel will appeal to younger teens but does not quite manage to cross over into adult territory.