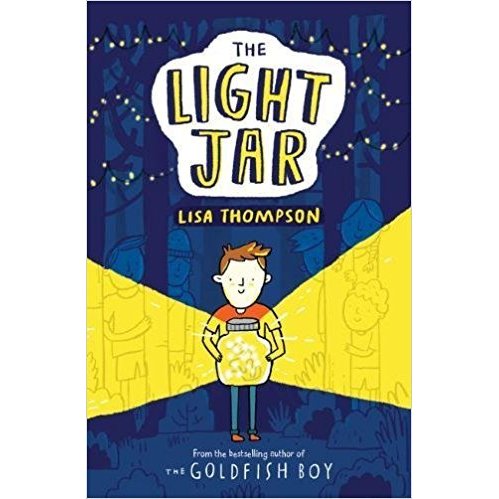 The Light Jar by Lisa Thompson

The Goldfish Boy was Lisa Thompson’s bestselling debut that hit shelves early last year. It has since been nominated for a number of children’s book awards, including The CILIP Carnegie Medal 2018 and The Waterstones Children’s Book Prize. January saw the publication of her second novel, The Light Jar.

Nate knows something is wrong with his mum. It’s late at night, she’s driving too fast and who goes on holiday in the early hours of the morning anyway? After a scare with another vehicle, she tells him the truth. They’re not going on holiday, they’re running away from her boyfriend, Gary.

Things go from bad to worse when they arrive at the ‘holiday’ destination. The country cottage is dark, derelict and scary. With holes in the roof, it looks like a house of horrors rather than a refuge. Making themselves as comfortable as they can, they curl up for the night and try to sleep.

The next morning Nate’s Mum goes out to stock up on food and necessities. Twenty-four hours later, when she still hasn’t returned, Nate starts to really panic. Could Gary have found her? Or maybe she deliberately left him so she and Gary could carry on their lives together without him? As his mind leaps to the worst possible conclusions, he begins to feel overwhelmed. Just as it all gets too much, a friendly face he hasn’t seen in years makes an appearance. Sam, his imaginary friend, is back to keep him company. Unsure if Sam’s return is for the better or for the worse, Nate’s world is turned upside down again by a knock at the door and a girl that needs a friend just as much as he does.

The first word that I would use to describe Nate at the beginning of this novel is vulnerable. He seems to understand that his mum’s relationship with Gary isn’t right but accepts it just the same. The light jar story that inspired the name of this novel is truly heartbreaking and gives you a clear insight into what his recent life has been like. Although aimed at the 8 to 12-year-old age group, this novel deals with a number of grown-up issues in a simplified way. This includes abusive relationships, loss of a loved one and feelings of abandonment. Having said that, this is not a ‘heavy’ children’s book but one that can be equally enjoyed by adults.

The Light Jar is full of colourful, memorable characters and rich locations that make it wonderful reading. Lisa Thompson has followed up her incredible debut with a novel just as a heart-warming and fun. Whether you’re an adult looking for something lighter to read, shopping for someone else or looking for a book you can enjoy with your kids, this will tick all those boxes.