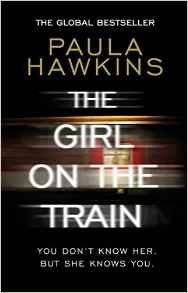 The Girl on the Train by Paula Hawkins

Every morning Rachel takes the same train to work and every morning it stops at the same red light. So on weekday mornings, she gets a tiny insight into the lives of the couple that live at the house next to the tracks. She used to live on the same road herself with her ex-husband but the couple she watches every morning moved in after she left, she never knew them. With no real names to call them by she makes up her own for the young couple, Jess and Jason. Rachel feeds off her morning snapshots into the stranger’s relationship, any distraction from her single, alcoholic existence is welcomed. Then one morning the train pauses and she sees a man kissing Jess passionately, a man that isn’t Jason. She’s shocked at the deceit, having always pictured them as the perfect couple.

One painfully drunken evening she heads back to the street she lived on with her ex-husband, the same street where Jess and Jason live. The night’s a blur and the next morning she wakes at home, great chunks of her memory of the night before missing. It was her worst episode yet and even though she can’t remember what happened she’s filled with unease. Later she hears the woman she knows as Jess is missing and she went missing on the night Rachel was on her street…

This dark tale of two women, one missing and one mistrusting her own memory is completely addictive. The lead character, Rachel is compelling and intriguing although as a reader you’re torn between despising, liking or pitying her as ethics lapse and her drinking peaks and troughs. She’s nosey, a busybody but you can understand why as there’s a desperation in her both to distract herself from her own problems and to genuinely help.

Due to The Girl on the Train being written from a number of different characters perspectives it manages to keep the story moving incredibly quickly, adding to the tension and keeping you guessing right until the end. So is Rachel a nosey alcoholic, a murderer or a witness? You’re going to have to read it to find out, all I can tell you is that The Girl on the Train is the best thriller I’ve read in ages. Buy The Girl on the Train by Paula Hawkins