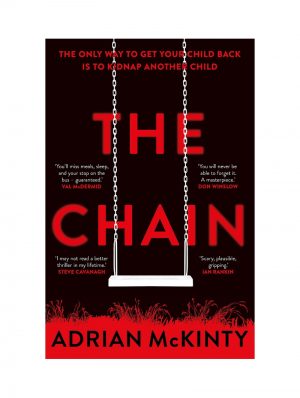 The Chain by Adrian McKinty

The Chain is the brand new novel from prolific Irish crime author, Adrian McKinty, published by Orion Books. Paramount has already purchased the film rights for a seven-figure sum but there’s no news on the actors who might be involved.

You’ll become each one.

It’s every parent’s worst nightmare, to have their child taken by a complete stranger and Rachel is no exception. When she discovers her teenage daughter, Kylie has gone missing from the nearby bus stop and never made it to school, her world crumbles. When Rachel received an anonymous call explaining what she needs to do to get her daughter back safely, she realises she is just a pawn in a much larger game, just a link in The Chain.

To get her daughter back unharmed, Rachel has to pay a ransom and kidnap another child. Kylie will only be released when the parents of the child she abducts take another victim, and so the chain continues. Although Rachel knows it’s madness to abduct another child and pass on the pain she feels, she doesn’t hesitate. Banned from involving the police or anyone in a position of authority, she scrapes together the ransom and begins to research Facebook for potential families to target.

Once she’s chosen a target, she needs to find a location to keep them. Somewhere quiet where any yells for help won’t be heard. Although she knows it’s madness to continue the chain, she knows they’re watching her, she knows she can’t fight something that’s been going on for years. What she needs is Kylie back and she’ll do anything to make that happen.

The Chain by Adrian McKinty is a thriller that grabs you from the very first chapter. There’s no setting the scene or slow build-up, you’re thrown right into the action and the pace never slows down for a moment. This is just one of the reasons it’s very easy to imagine it transferring to film well.

The main protagonist, Rachel, is a powerhouse of a character who puts her daughter before everything. When she discovers Kylie has been taken, she’s on her way to an appointment with her oncologist for what she thinks is going to be bad news, but she pushes her health concerns to the side and carries on. She’s smart, determined and headstrong, making her great fun to read.

There’s a lot more to this story than I can mention without spoiling half the plot so I’m going to wrap it up there. I’m sure The Chain will be grabbed up by hordes of book clubs when it comes out in paperback as there’s so much to discuss. It did leave me wanting a few more details about how the kidnappings started, simply due to the fact that it’s a fascinating idea, but overall it’s been one of the best thrillers I’ve read this year.

Fast, tense and original, The Chain by Adrian McKinty is a thriller you’ll find hard to put down.

If you like The Chain by Adrian McKinty you’ll love Dark Pines by Will Dean.