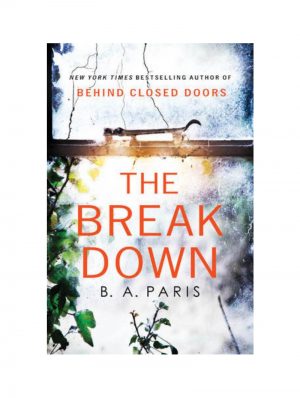 The Breakdown by B A Paris

The debut novel from B A Paris, Behind Closed Doors, became a New York Times bestseller and rocketed her up the UK charts. Now she’s back with her second novel, The Breakdown.

When Cass drives the shortcut home through the woods, in a torrential downpour, she doesn’t expect to see another soul. But when she comes across a car, possibly broke down, she pulls over to make sure they’re ok. She sees a figure in the car but they make no effort to get out or ask for her help, she starts to get nervous and wonders if it’s a trap to lull people out of their vehicles in the night, so she quickly drives away.

The next day she hears the news that it was a woman in the car, a woman she knew, a woman who had been brutally murdered. As the shock sets in she begins to question everything about that night. Did she see anyone else? Had the woman been alive? Could she have helped if she’d just got out and checked? Could she have stopped the murder if she hadn’t driven away?

Plagued by guilt but not wanting to share the truth with her husband, the weight of her secret starts to pull her apart. When the phone calls start she begins to get really scared. She knows it’s a man on the other end, even though he doesn’t speak and soon she convinces herself that it’s the killer watching her. She starts to think someone has been in the house and keeps seeing the same man looking up at their home but can it all be in her head like her husband thinks? With a family history of early-onset dementia and with her memory starting to deteriorate she can’t help but doubt her own sanity, but if she can’t trust herself, who can she trust?

Sharp and twisting, B A Paris has brought us another fast-paced page-turner that’s set to keep her fans biting their nails right until the end. But what novels have inspired her to write psychological crime? Thanks to the lovely people at HQ and Harper Collins, I got to ask that exact question. In her own words, here are BA Paris’ top 5 crime novels:

And Then There Were None – Agatha Christie

This was the first crime novel I ever read. I was fourteen at the time and it opened me up to a whole new genre. I read as many Agatha Christie novels as I could find that summer, hiding behind the sofa where my brothers wouldn’t find me. And Then There Were None remained my favourite, and I was thrilled to be able to give it a mention in Behind Closed Doors.

Sleeping With The Enemy – Nancy Price

This was the first ‘modern’ crime novel I read. In Sleeping with the Enemy, Laura fakes her own death to get away from her abusive husband. But what makes this book especially chilling is the ends Martin goes to in order to track her down – brilliantly brought to life in the 1991 film of the same name.

This book really creeped me out and the film even more so. I’ve seen it three or four times and I still find the tension it instils in me almost unbearable. The premise – a novelist imprisoned, then tortured by his number one fan – is enough to make any author’s blood run cold!

We Need to Talk About Kevin – Lionel Shriver

This is one of my favourite books of all time. It is so much more than a story about a high-school massacre; at the root is a mother’s failure to bond with her child and the associated guilt which that brings. I loved the way the story was told through letters from Kevin’s mother to her absent husband Franklin. A truly amazing book from an amazing author.

It would be impossible not to include the brilliant Gone Girl in this list. What is especially clever about this book is that the two protagonists, Nick and Amy Dunne, are both unreliable narrators. They both tell conflicting stories – Nick in the present after Amy goes missing, and Amy in the past, through the diary she kept of their marriage.  The book’s strength is that not only do they lie to each other, they also lie to the reader, so that in the end, no-one really knows who or what to believe.

A huge thank you to B A Paris for taking the time out to recommend her top crime reads.

If you like this, you’ll love Behind Closed Doors by B. A. Paris