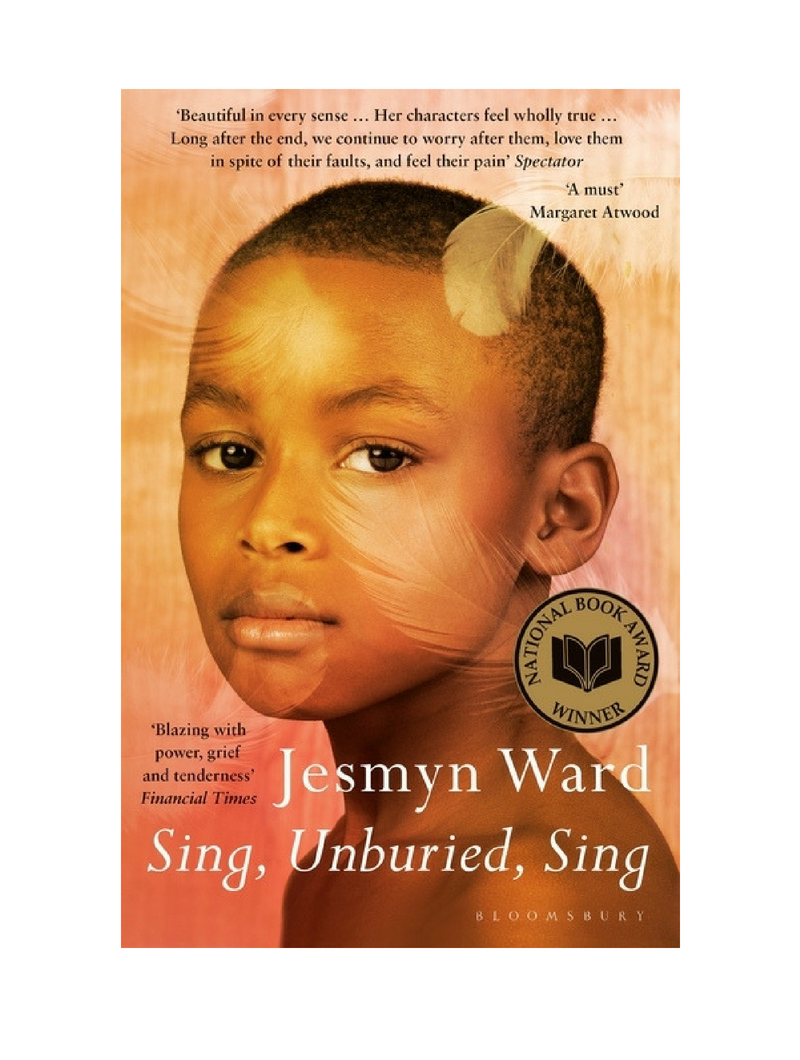 Today on The Tattooed Book I review the third book on my Women’s Book Prize reading list, Sing, Unburied, Sing by Jesmyn Ward.

Jojo is a 13-year-old boy, living with his mother, little sister and grandparents in Mississippi.  His mother, Leoni is black and his father, Michael is white. Jojo does remember his father from before he was incarcerated, but it’s his grandfather, Pop, who has been his male role model. A gentle giant of a man, Jojo admires his strength, his common sense and the stories he tells. But there is one story he has started over and over but never quite finishes. The story of a young prisoner he had been wrongly imprisoned with called Richie.

Shortly after Jojo’s birthday, Leoni drives him, his sister and her friend to the State Penitentiary to collect her newly released husband. But the drive isn’t as innocent as it seems, and Leoni’s uses the drive to carry drugs across the state. What the children believe is an innocent trip to collect their father turns in to something much darker.

What Jojo doesn’t tell anyone, not even his little sister Kayla, is that is wasn’t just his dad that they collected from the penitentiary. The ghost of Richie had stayed at the penitentiary for decades but when he sees Jojo, he senses the family connection to Pop and joins them on their car ride. Jojo doesn’t know who he is but he’s used to occasionally seeing someone like this, that others can’t. Eventually, he pieces the story of Richie together and the ghost begs him to get Pops to explain why he left him there all those years ago.

Sing, Unburied Sing is an incredible tale of race, family, drugs and history. Jesymn Ward’s character-led narrative inspires hope through the children and their closeness but negligence, depression and hopelessness from so-called parents that have become overwhelmed by their own sense of failure. Barely older than a teenager herself, about a third of the way through the book, Leoni ponders the possibility of having another child; ‘we could get it right this time.’ She sees both her children and the relationship she has with them as failures, not striving to be a better parent but already giving up on them at just thirteen and three-years-old.

Jesmyn Ward has an overwhelming talent for humanisation by revealing the multiple viewpoints within Sing, Unburies, Sing. The novel begins from Jojo’s perspective, leaving you convinced that Leoni is a horrible mother; violent, selfish and lazy. But as the details of her situation are unveiled you come to love her just as much as you hate her. Once reunited with her husband, the loss and isolation she’d been suffering from for years are exposed, as well as the loss of her brother and her inadequacies as a parent.

Leoni’s lack of parental skills has pushed her children together, making their bond unbreakable. The truth is, she’s incredibly jealous of this bond, she wants to be the one they turn to but instead their closeness emphasises her loneliness and failures. The few times she reaches out to Kayla (Michaela) both physically and emotionally, she refuses her. Every time Kayla demands Jojo instead, hurting Leoni to the verge of violence. She imagines wiping her tears from her face with a slap; the insight is stomach-churning to read, especially with her flip from loving to violent being so incredibly sharp and quick.

Leoni’s mother recalls her fears for Jojo and Kayla the day that she watched her daughter buy herself food and ignore her children’s empty stomachs. It’s a short recollection but one that highlights the lack of nurturing in the children’s lives. Their grandparents have tried to make up for it but Jojo and Kayla are still influenced by the lack of direct parental care. This is made abundantly clear by the fact that Jojo refers to Leoni by her first name rather than mum or something similar. She takes it as a slap in the face every time, constantly driving the wedge between them even deeper.

Pop is the quiet centre of this novel, pulling the two story threads together. He is impossible not to fall for, he’s a man doing his best in an impossible situation. His wife is dying, his daughter is failing as a mother and he does what he can to support his grandchildren. When you come to read Rich’s story, Pop will break your heart.

Sing, Unburied, Sing is a novel of modern struggles in one of the poorest areas of America and a reflection on the brutal racial history that’s shaped it. It makes for painful, important and truly enjoyable reading. This book will be staying with me for a very long time and will definitely be one of my top books of 2018.

Check out my review for the Women’s Prize for Fiction 2018 winner Home Fire by Kamila Shamsie.