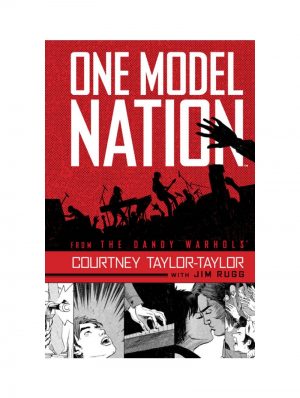 One Model Nation by Courtney Taylor-Taylor with Jim Rugg: Review

One Model Nation is a story of what happens when angry youth, politics and pop culture collide. Set in 1977 Germany, the band One Model Nation find themselves becoming increasingly popular but also unwittingly, the public face for a terrorist movement known as RAF (Red Army Faction). The RAF is responsible for bombings, police killings and shootings and although the band denies involvement in any of these actions, their clothing, friends and illegal concerts all add together to create an image the press easily sell to the public as defining the “terrorist generation.” The four members try to prove their love lies strictly in the music but every acquaintance they have seems to suck them in deeper to the RAF, the infamous Baader-Meinoff Gang and the political underground.

I really enjoyed the premise of this graphic novel, the idea of band or musician being labelled as the face of movement or generation has always been fascinating to me. This probably hails from my teenage love for Marilyn Manson and the way he became the public whipping boy, blamed for the spread of youth violence and especially teen gun crime in the ’90s. From Elvis to My Chemical Romance, almost every generation has had a music genre, band or musician that has taken the blame for teenage rebellion and this story sums it up perfectly.

Another great level to this story, that I was unaware of until reading the extras at the end of the novel, is that some of the characters are based on real people, as are some of the historical events. I am not up on my post World War 2, German communist movements and for those with me on that, the Baader-Meinoff Gang were a real terrorist gang inside the RAF and the characters Andreas Baader and Ulrike Meinhof were true life members. One of the main scenes in the graphic novel where Ulrike frees Andreas from custody by killing his guards after his arrest is also based on true events. I was unsure of this scene as I first read it but the explanation of it by Taylor-Taylor at the end gave me a whole new appreciation for it.

Overall I really enjoyed this evocative indie story. The illustration and colouring are emotive and beautifully done. The story is thought-provoking but I did find the characterisation of the separate band members a bit lacking as I struggled to tell one from another. This is Courtney Taylor-Taylor (from The Dandy Warhols) first venture into graphic novels but I will most definitely be looking into the artist Jim Rugg‘s previous work.

If you like One Model Nation by Courtney Taylor Taylor you’ll love Storm by Tim Minchin, DC Turner and Tracey King