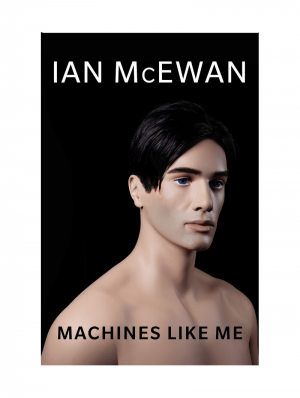 Machines Like Me is the latest novel from the critically acclaimed author Ian McEwan. His earlier books, Atonement, On Chesil Beach and The Children Act have all been made into feature films. As well as winning numerous literary prizes he was also awarded an OBE in 2000.

In an alternative 1980s, Charlie invests his inheritance in the latest groundbreaking technology. Although he’s scraping a day-to-day living playing the stock markets, he makes the extravagant purchase of the latest synthetic human on the market. All the female models, known as Eve, were sold out so he settled for an Adam.

Adam isn’t the only change to Charlie’s life, he’s also started a relationship with his neighbour, Miranda. Together they share the input required to bring Adam to life, hoping it’ll stop the Adam becoming the mirror image of Charlie. To begin with, their relationship puts Adam on the backburner but soon Adam gives Charlie a warning.

“There’s a small but significant possibility that she might harm you.”

The warning leads Charlie to question the innocent relationship he thought he had and soon Miranda’s darkest secret comes back from the past. At the same time, Adam’s intelligence is on increasing and soon Charlie’s wondering there’s a threat inside their home as well as outside.

Machines Like Me is my first venture into Ian McEwan’s writing, shocking I know, but I’m sad to say this wasn’t the best introduction. Although the title and the blurb imply the novel is based around Adam, I couldn’t help but feel he was an underused character, especially during the torpid first half of the novel.  This book focuses partly on Adam, partly on Charlie and Miranda’s relationship, her past and the alternative history. If it has chosen to focus on one path then I’m sure it could’ve been wonderful but every path it went down simply left me wanting. I didn’t find myself warming to any of the characters and struggled to lose myself in the plot.

The book features the world famous mathematician Alan Turing, as if he was alive during this 80s timeframe, as a prominent mind of the time and another owner of a synthetic human. I’ve always struggled with real-life people who have passed away, featuring in modern fiction, putting words in the mouth of people who can’t agree or disagree. I’ve always wondered how loved ones or family members would feel about their beloved being represented in fiction. Please don’t get the wrong impression that there is anything negative about Alan Turing’s actions in the novel, it’s just something that has always jarred me in fiction.

Overall, simply put, Machines Like Me by Ian McEwan mostly left me wanting more robots. I wanted to know more about Adam and the synthetic humans scattered around the globe. There just seemed to be so much potential here, so many paths for exciting ideas, questions about humans and robots together that could have been explored.

If you’re looking for some incredible science fiction try any of these books by James Smythe.