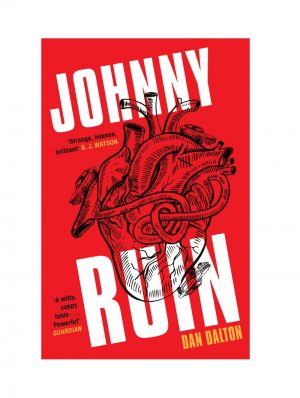 ‘If you really want to fuck someone up, love them as hard as you can.’

Follow Johnny Ruin’s narrator on an epic journey through his own psyche with rock legend Bon Jovi by his side. His mind may be racing but his body is somewhere else entirely, alone on the floor of his flat, unconscious and on the brink of something much worse.

His situation isn’t simply the result of a life-changing break-up, but also clinical depression, diagnosed in his twenties. Locked in a world made up of memories, imagination and his worst self-doubt, he battles to come to terms with the outcome of a tragic car accident and the breakdown of the relationship with the woman he loves. Throughout his journey of self-discovery, Bon Jovi drinks, gives outstanding advice and provides damn good hugs (I would like to think there’s some great pouting and hair flicking going on there too, but maybe that’s just me).

I’ve read a handful of novels that include characters suffering from clinical depression and I’ve found most of them really difficult to relate to. Not because I’ve been lucky enough to have never been in that situation, quite the opposite. I never fully believed in the characters. From depression being ‘cured’ by love or even being something a character moves through, like a stage in life, I’ve struggled to find a genuine voice that sums it up.  Depression is an all-consuming illness and I’m unsure if you can accurately describe it without having been through it. Even going through it doesn’t necessarily give you the talent to put that experience into words. Thankfully there are people like Dan Dalton in the world that can articulate this experience so perfectly. From the selfishness to the self-bullying, the memory confusion and coping strategies, this novel picks up on many aspects of the illness I’ve not seen handled so deftly in fiction. This is most likely due to depression being a changeable beast, one day you mostly function, the next you can’t get out of bed, another will fill you with self-doubt, after that you may barely feel anything at all. Somehow Johnny Ruin captures this inconsistency like nothing I’ve ever read before. This novel feels incredibly raw and very personal, which is what makes it so moving. Dan Dalton has been very honest about his battle with depression through his journalism and this feels like the natural progression from that.

Bon Jovi is the curveball in this novel, he may sound like a strange inclusion but it all becomes clear in the end and his presence is a necessary relief from the intensity of what the narrator is going through. He’s a wingman through the darkest recesses of the narrator’s inner thoughts, often providing a voice of reason, herding him to a finish he must reach to survive.

Dark and raw, poetic and evocative, Johnny Ruin is an all-consuming novel. Once I’d started reading, I didn’t want to stop; but with one chapter left I had to put it down because I didn’t want it to end. Johnny Ruin is a heart-breaking tale of depression and battling your inner demons. Anyone that’s been through something similar will relate to this story and anyone that hasn’t will be able to understand the illness better. I finished Johnny Ruin with tears in my ears and a smile on my face, I can’t remember the last time a book did that to me.

If you liked Johnny Ruin by Dan Dalton then you’ll love Until I Find You by John Irving.