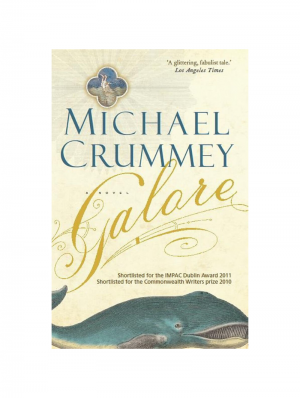 Galore by Michael Crummey tells the story of Newfoundland island and the families that live there from the mid-1800s to the early 1900s.

The inhabitants of the island live a hard life, only surviving by fishing the ocean that surrounds them. A lousy year at sea means death by starvation and frostbite to the poorest families living there. A year just like this sees a whale beached on their shore, leaving the islanders rejoicing as they know the whale will feed them and bring enough money to support the community for another year. When one of the oldest and wisest older women of the village slices open the stomach, none of them expects a man’s body to spew out. Even less expected, was for the albino looking man to cough and splutter to life.

Spanning several years, Galore follows two leading families and how their lives intertwine and repeat through the generations. With a religious vein throughout, the story comes across unusually fable-like compared with most modern fiction, which makes for a refreshing change. The characters are brilliantly vivid, especially during the first half of this book where the story really grabs you. Saying that, it does leave you with the feeling of waiting for something to happen and that the main story will be about the stranger found in the whale. This is not the case as he fades out as the central character, and the book becomes a collection of tales of different characters and events. Although the second half of this book does not feel as strong as the first, the islanders alone make the book an enjoyable and worthwhile read that will stay with you long after you have turned the final page.