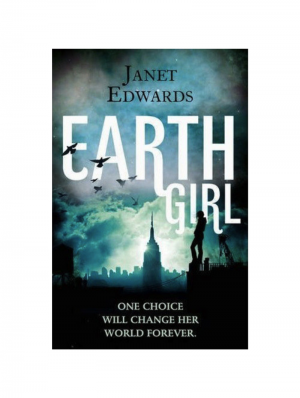 It’s 2788 and Earth is unrecognisable. Cities of skyscrapers, homes and offices are left abandoned in ruins. The planet is no longer a thriving hub of life, only the ‘apes’, the ill, and the archaeologists are left. Now that so many others planets are accessible through teleportation and provide work, safety, stability and reliable weather patterns, why would anyone stay?

Well, for some, it’s not a choice. Neans (more offensively known as ‘apes’) don’t have a choice in the matter as they are unable to survive in any other environment apart from Earth’s. Even if they are born on another planet, a nean will suffer from asphyxiation immediately and die within minutes unless teleported to Earth straight away.

Eighteen your old Jarra is one of these ‘handicapped’ children. Like many, she was abandoned at birth and handed over to the state, where she was homed with nine other neans of a similar age. As they turn eighteen and are regarded as adults, they have to decide what to do with their lives. Jarra decides to apply to an off-Earth university to do history. Every first-year history course is run on Earth due to the archaeological value of the abandoned terrain, none of the other students will have a clue she’s a nean. In her head she plans to unveil her secret at the end of the year, forcing the students to realise ‘ape’ is a hugely offensive term and that she is just as capable, if not more so, as they are. On her first day, she expects all the other students to be idiots she will despise and tire of quickly. Little does she realise how special these people are and how much she had judged them as much as they may judge her.

This is an excellent young adult science fiction read. The strong female lead in Jarra is feisty and brave, but a bit of a suck-up in her lessons. However, that is understandable due to her constant want to be better than everyone else, to prove her deep-seated doubt that she’s a second-class citizen wrong. With a dash of action, a sprinkling of romance, some teenage angst and a couple of collapsing skyscrapers, this novel contains everything you could possibly want to grab a teenage reader and keep them utterly enthralled.