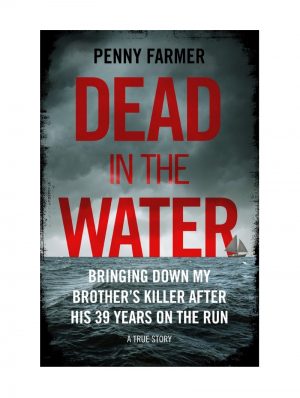 Book review: Dead in the Water by Penny Farmer

As an avid listener of true crime podcasts, I’d heard the harrowing story of Christopher Farmer and Peta Frampton before I ever read about it. The BBC 5 live podcast series, Paradise told the story in more details than I’d ever heard before. The series is hosted by radio and television presenter Stephen Nolan and features a number of Christopher and Peta’s loved ones. One of these individuals is Penny Falmer, who was just 17 years old when her brother, Chris was murdered in 1978. When I heard she had written a book, titled Dead in the Water, about her family and her fight for justice, I knew I had to read it.

Christopher Farmer and Peta Frampton went missing while travelling around the coast of Belize and Guatemala in 1978. Although communicating with loved ones back home was a slow process, Peta had kept them updated on the couple’s adventures with regular letters. When all communication from Chris and Peta stopped, their families alerted the authorities.

Seven months after the couple’s journey began, their bodies were found floating off the coast of Guatemala after coming loose from the engine parts that had weighed them down. Unidentified at the time, it was ten months after Chris and Peta went missing that their families were made aware of their tragic deaths.

The couple had joined sailor, Silas Boston and his sons Duane and Vince as they sailed around the coast but had reportedly parted ways before their deaths. However, when it was discovered that Peta’s last letter to her family had been posted two weeks after her and Chris’ murder, the question everyone wanted to know the answer to was, who posted it?

With no witness to the murders and limited communication between multiple countries, the investigation came to nothing and Chris and Peta’s families were left with their unanswered questions.

Years later, Chris’ sister Penny used the internet to start her own investigation into the tragic murders. She managed to track down Silas’ then adult children through Facebook and discovered the horrendous truth. Duane and Vince shared horrifying details of parental abuse and how their father had tortured and murderer Chris and Peta, as well as their own mother.

You would think that knowing who the murderer was would be the end of her journey to find justice, but this was just the start of a whole new chapter.

Dead in the Water from Penny Farmer is a heartbreaking tale of familial love and a sister’s hunt for justice. There are numerous twists and turns which would be disturbing if they woven between the pages of a novel let alone as part of a true story. Although this story is written by Chris’ sister, her training in journalism shines through in her detailed and honest account that grips you immediately. Prepare yourself because there are parts to Dead in the Water that are truly harrowing, especially the son’s account of Chris and Petra’s final moments.  I can’t even begin to imagine what Penny Farmer went through to get these details onto the page but she has certainly done justice to Chris and Petra, spreading awareness of their story and finding justice in the truth.