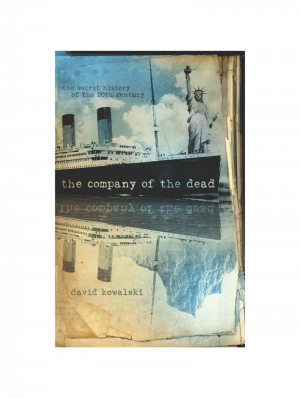 The Company of the Dead by David Kowalski

The Company of the Dead by David Kowalski tells the story of one man’s opportunity to stop the Titanic from sinking and the devastating consequences it has on the world.

When a sealed safe is lifted from the sunken, rotting wreck of the Titanic, all the jewels, heirlooms and items of monetary value are whisked away. The man behind the dive is thrown what is thought to be a worthless handwritten diary as a small token of appreciation. Suitably underwhelmed, he plans to give it away, but after reading it he realises he realises he owns a world-changing diary.

The diary tells the story of Dr Wells, a surgeon who’s called into a military base to help a severely injured man with his pioneering techniques. He’s whisked across America and down into the depths of a desert to a secure bunker. There he operates on a man with a false spine, a technology not yet invented. The dying man’s injuries are a result of the pressure from time travel. The doctor knows he has seen too much and won’t be left to walk away and when he realises the time machine is his only escape, he makes a run for it.

Hurtled back to the early 1900s, he decides he’s has the perfect opportunity to right the wrongs in history. So he decides, that on the 15th of April 1912, he would start by single-handedly saving the Titanic.

The man reading the Doctor’s diary is living in the reality that Wells created. A world of war, conflict and later he discovers, annihilation. A crew of men come together to undo Well’s changes in an attempt to save the work from atomic devastation.

I was expecting numerous time leaps in this immense 750-page novel, but it approaches the genre from a different angle to many works of speculative-history. The main characters are already set in the alternate history, so the story follows their desperate attempt to undo the changes rather than create them, and time travel itself only happens at the beginning and end of the novel. Most of the story is set around the crews epic travels across the country to get to the time machine. Hiding from government bodies and the police, being set up as murderers and traitors, and fighting in front line battles.

The first fifty pages of the book had me utterly gripped, the next fifty had me utterly confused due to the sudden influx of characters and alternate world history but as soon as I had a grip on the crucial personalities, I found myself completely absorbed. Due to the alternate history style of this book, I am sure it will get comparisons to Stephen King’s, 11.22.63 or Shift by Tim Kring but after reading all of them, The Company of the Dead is definitely my favourite.

The Company of the Dead really is like three novels in one, a concoction of sci-fi, thriller and war novel, and it does each style superbly. It may not be a book for people who only manage a page every now and then due to its length and complexity but for readers who love in-depth twists and turns this exquisite piece of alternate history fiction ticks every box.

If you liked The Company of the Dead by David Kowalski, you’ll love 11.22.63 by Stephen King.

Read an excerpt of The Company of the Dead now.

Buy The Company of the Dead by David Kowalski