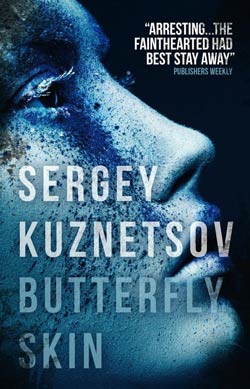 The Russian cult hit that became a best-seller in the 1990s is now available in the UK.

The world of news is changing and as the public’s acceptance of the internet increases so does their want for online news. Ksenia is one of the driving forces behind online journalism but even that doesn’t guarantee her a pay rise. When she mentions it to her boss, he insists he can’t do a thing unless she can come up with something new and exciting.

At the same time, there’s a killer loose on the streets of Moscow and he’s targeted a number of young women already, torturing them and leaving them in a horrifying condition. Ksenia’s plan is to create the first website fully dedicated to a killer, to help protect the public, allow them to raise concerns, collect data, maybe even catch them. But as the website grows in popularity even she wonders if she’s helping or just supplying a killer with more exposure.

As both she and her website starts to get more exposure she starts to take a deeper look at her personal life. Ksenia’s always ‘played’ and enjoyed being the submissive to a dominant partner but she’s newly single and wonders if she’ll ever find someone who’ll understand her passions, especially when she doesn’t quite understand them herself. Soon someone new does appear in her life but as she relishes the control and pain, she wonders if she can relate to killer just a tiny bit too much.

Sex in novels is risky business, a book can be dismissed away into the realms of  ‘well it’s just trying to be fifty shades of grey’ in a heartbeat. PLEASE do not dismiss this book in that way because you will be doing both yourself and the book an injustice. This is sharp and intelligent psychological thriller that doesn’t so much concentrate on the killer but on the woman who is making a career from his actions. The novel is also set in a fascinating but recognisable era where Russia is rediscovering itself politically and embracing new technologies. As the quote on the front reads, it is not for the faint-hearted and details of the murders are grizzly, occasionally making uncomfortable reading. This, however, doesn’t make it unpleasant reading, quite the opposite, this book is dark, gripping and Kuznetsov has a unique writing style that will leave you wondering why you’re enjoying reading something so twisted quite so much.