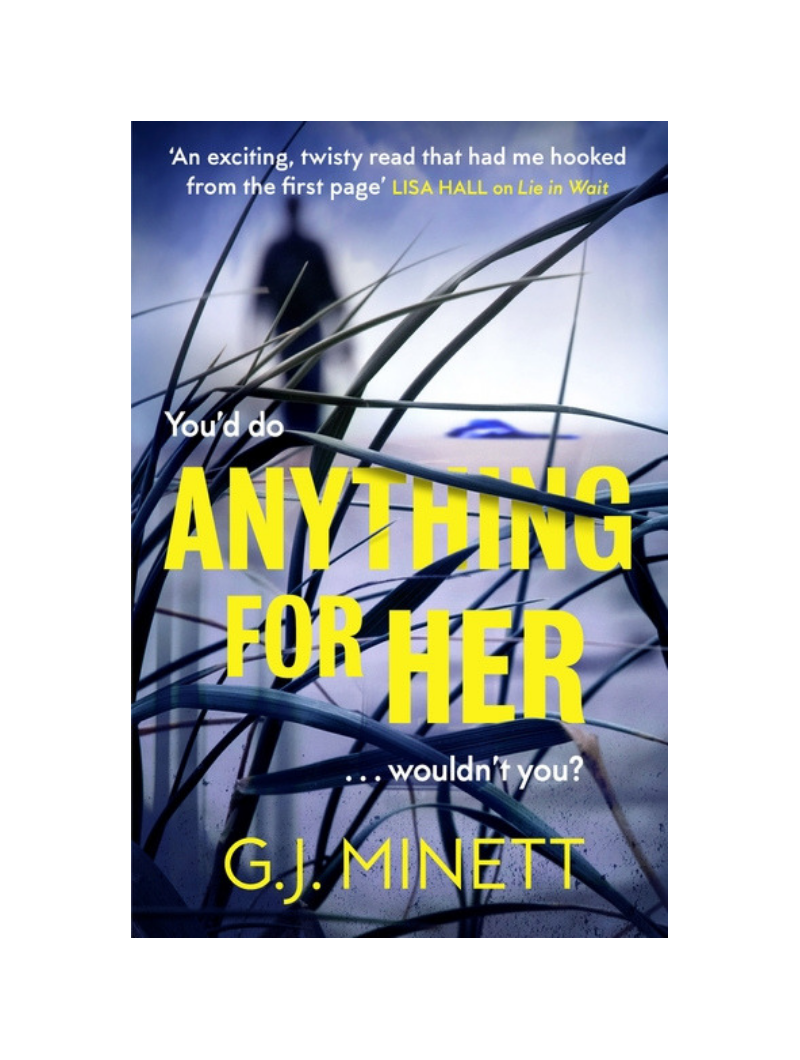 Anything for Her by G.J. Minett : Review

Anything for Her is the third novel from Gloucestershire born author G.J. Minett.

Most of us have someone in our lives that we’d do anything for. For Billy, it’s his ex-girlfriend and first love, Aimi. Years after she left him and moved away, he still never really moved on.

When Billy goes to visit his ailing sister and returns to the town he grew up in, the last thing he expects is to see Aimi in the supermarket. When she asks to see him again, even though he knows his sister will disapprove, he just can’t say no. When she shows him the bruises her husband has left her with and when he hears her horror stories of how her stepfamily treat her, he’s devastated. Knowing full well that he still loves her, Aimi asks him a question, one she says only he can help her with. Will Billy help Aimi fake her own death.

But there are reasons that Billy’s sister has no love for Aimi and she knows their parent’s death has left him vulnerable. Is Aimi really running from an abusive relationship or is there more to her story than meets the eye?

Anything for Her by GJ Minett brings us a story as quietly sad as it is thrilling. Billy is just about managing to function as an adult until his childhood sweetheart regresses him to the vulnerable state he found himself in after his parent’s death. Even though his sister is ill, it’s Aimi that he puts first. Throughout the story, you’ll be mad at him for being so blind but also pity his complete innocence. Anything for Her has a great punch for an ending and I never knew quite where it was going until the final pages. If you’re a fan of BA Paris or you just love a good thriller then this will be right up your street.

Take a sneak peek between the pages of Anything for Her with the brilliant extract below.

ANYTHING FOR HER: EXTRACT

Billy kicked the rear left wheel of the shopping trolley to line it up properly as he continued to make his way along the cereal aisle, eyes glued to the shelves in search of Alpen. There seemed to be some unwritten law which guaranteed that every time he picked a trolley from the rack it would be the one with a mind of its own. None of the wheels seemed particularly keen to head in a straight line so what should have been a gentle stroll around Tesco was fast turning into a wrestling match with an unwieldy heap of metal, a contest he seemed to be losing hands down.

Not even a recalcitrant trolley could dampen his spirits though. This was like a trip down memory lane for him – not so much this store because the way he remembered it they’d always gone somewhere nearer than Tenterden to do their shopping in the past. But they’d always made a bit of an adventure out of their Saturday mornings – himself, Mia and their mother. He could remember even as far back as when he was a toddler and they used to sit him in the trolley’s foldaway seat with his legs sticking through the gap. Mia would push him around the store, taking things off the shelves and asking him to put them in the trolley for her and his job was to stick his arms out to indicate which way they were going next.

Then, when he was old enough, they used to send him off to track down specific items that were deemed to be his responsibility – things like crisps, fizzy drinks and biscuits – and he got to choose. It was almost like being a grown-up.

On the way home from whichever store it was – Mia would know, he’d have to ask her – they’d always stop at a café and have a mid-morning snack and he’d sit there reading his copy of the Beano or Shoot, totally oblivious to what was going on around him. It was a family occasion but not one his dad ever embraced. Men didn’t shop for groceries – they washed cars, mended fences, pottered around in sheds. Maybe that’s why Saturday mornings were so precious.

He’d slept in till ten that morning. Tired as he’d been after the journey, he’d still lain there for at least an hour the previous night, trawling back through his conversation with Mia before finally drifting off to sleep. He might well have dozed on until midday if she hadn’t come in to wake him, but the moment she said she was going to the supermarket and wanted to know if he fancied going with her, he’d leapt at it.

If you like Anything for Her by G.J. Minett then you’ll love Cross Her Heart by Sarah Pinborough.