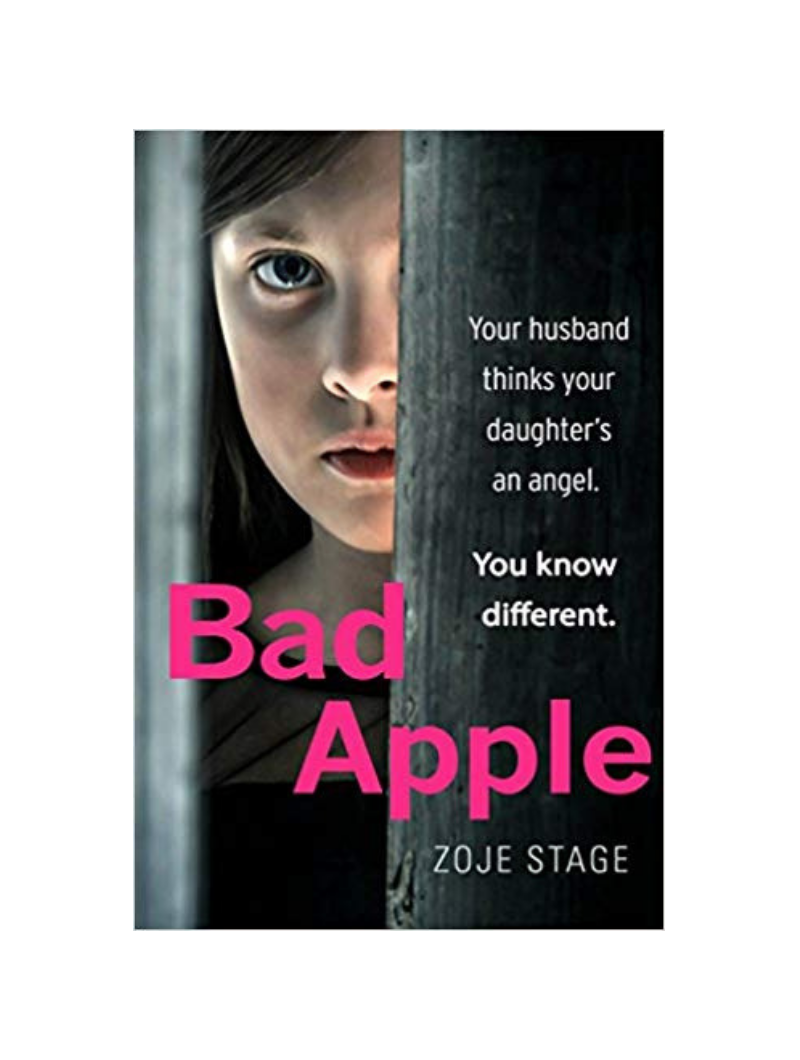 Bad Apple is the debut novel from the former filmmaker and screenwriter Zoje Stage (in the USA Bad Apple by Zoje Stage Apple is titled Baby Teeth) published by Bantam Press.

Her parents, Suzette and Alex, were worried about her to begin with but doctors confirmed there was nothing physically wrong with her. As an exceptionally intelligent child, she had just decided not to talk.

Then, she changes her mind, and what she says chills Suzette to the bone.

At first, Suzette tries to brush off her daughter’s strange choice of first words but when Hanna silently denies ever speaking in front of Alex, she knows something is seriously wrong.

Alex tries to calm Suzette’s fears but he’s not there all day every day, he doesn’t see the dark side to their daughter. He didn’t see her hit the toddler in the face at the supermarket, he hasn’t had to deal with the numerous school and babysitter problems, he’s not the one that feels the hate resonate from her.

As well as home schooling a daughter that can’t seem to stand her, Suzette’s recovering from a recent operation to treat the effects of her Crohn’s disease. She’s lost track of if she’s run down from being sick or from looking after Hanna. She had so looked forward to being a Mother but the reality hadn’t lived up to the expectations. She had the perfect husband, the perfect home and she’d wanted the perfect family to go in it. She also wanted to prove that she could be the great Mum that her own Mother never was.

What Suzette and Alex don’t realise is that Hanna knows exactly what she’s doing, she’s smarter than either of them realise. All she wants is to live happily with her Daddy, and she’ll do anything to get her way.

Part psychological thriller, part horror, Bad Apple is an unsettling read. I’m a huge fan of dark stories in all formats and creepy kid tales are by far some of the most unnerving (The Black Eyed Kids creepypasta proves my point). What makes Hanna so unnerving is her intelligence paired with her naiveté and complete lack of compassion.

Hanna’s not incapable of love, it’s clear she adores her Dad but she sees Suzette as a barrier between them and one that has to go. At seven years old Hanna is already the princess of plotting and Bad Apple swaps perspectives from her to Suzanne, allowing you an insight into her plans.

You can’t help but feel sorry for Suzanne as you read about her troubled childhood, illness and being victimised by her own daughter. Then I felt sorry for her due to her wet blanket of a husband. It takes ages for Alex to believe his daughter could be anything but perfect. I understand struggling with doctors, babysitters and schools but once you add your wife to that list, surely you have to start listening.

Although Hanna is a complete nightmare of a child, Zoje Stage does manage to make you feel sorry for her a couple of times throughout Bad Apple. At one point Suzette accidentally ruins a toy of hers and she is utterly devastated (which obviously doesn’t work out in Suzette’s favour), her parents actions towards the finale of the book (trying to avoid spoilers) are also saddening but 100% understandable.

Overall Bad Apple (Baby Teeth) by Zoje Stage is fun creepy reading. Zoje Stage’s experience in film comes across in her work as it’s incredibly easy to imagine this being successfully adapted to screen. If you think your kids are a nightmare, pick this up, you’ll probably think they’re angels in comparison.