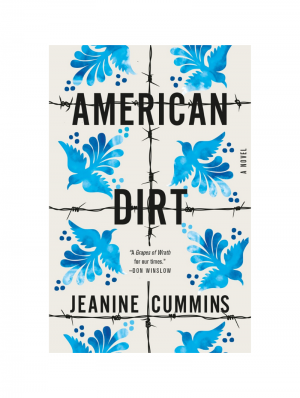 I began reading American Dirt by Jeanine Cummins a couple of weeks ago, and since I turned the first handful of pages, it’s contents and the way it’s been marketed have come under scrutiny. I’ll get to this later on in my review but let’s start with what it’s all about.

Every single member of Lydia’s family apart from her son Luca, who’s is quivering in her arms, is dead. Her husband, her mother and the 14 other members of her family have all been murdered. As they celebrated in the garden, she had been helping her son in the bathroom, so only they had the opportunity to hide. As the footsteps of the killers fade away, they continue to hide in the shower block, clutching to each other until Lydia decides it’s safe to move.

Even after she’s tiptoed between the bodies of her family and called the police, Lydia knows that she and her son aren’t safe. Statistically, most of the law enforcement that attend the crime scene will be informants for the same gang that killed her family. She needs to run, run from the man who is trying to kill her…the man she thought was her friend.

Running from a man with eyes everywhere won’t be easy, and Lydia knows she needs to leave the country and cross the border to America before she can find any hope of safety. The safest ways to avoid him will be the most dangerous way for them to travel. She has to make the perilous journey across the Mexico/US border that causes so many migrants to lose their lives every year, and she needs to do it with her nine-year-old son.

American Dirt by Jeanine Cummins is a gripping, heart-wrenching story of one woman’s journey to protect her son. The opening scene, when Lydia and Luca are hiding in the shower, makes for an incredible opener; your heart will be in your throat for the entire thing. The tension is relentless as you follow Lydia on her journey, but it’s Luca that really made my heart pang. Luca isn’t fully aware of their vulnerable situation. Still, he knows that he can’t give in to his grief, making it devastating to read how he compartmentalises, putting that grief away but knowing he will have to return to it later. Instead, they both carry their husband and father in different ways; Luca holds him close by wearing one of his caps and Lydia remembers him through a necklace he gave her to represent their family.

I love novels that are character-driven and focus on a small number of individuals, and American Dirt is both of these things. Although they meet a number of people on their travels and some stay longer than others, they are only seen through Lydia and Luca’s eyes. This allows you to be completely immersed in their world.

Lydia does make some incredibly risky decisions during this novel that did seem slightly unrealistic to me. When her husband writes stories on contentious subjects, the family usually stay in a hotel for a few days in case of retaliation. In this instance, she decides there’s no need for them to temporarily relocate, even though her husband’s latest article is about one of the most dangerous men in Mexico. The second decision I couldn’t understand was when she tells her entire story to a nun working at a refugee camp. She veers from mistrusting everyone around her, knowing they could all be informants for the man she’s running from, to sharing a vast amount of personal details with a complete stranger who doesn’t specifically need any of them.

Although these small moments felt unrealistic, they didn’t detract from how much I really enjoyed reading this novel. American Dirt is a fast-paced, evocative and addictive book that will stay with me for a long time to come.

So, what’s the problem? Why has American Dirt created such controversy? Well, there are a few reasons.

American Dirt has been described as ‘trauma-porn‘ and this, as an argument on its own, is something I would struggle with because thousands of novels and true crime books could be accused of the same thing. However, Jeanine Cummins has promoted this novel as a real insight into the struggles faced by immigrants on a daily basis. It’s obvious that she’s done a lot of research but some members of the Latinx literary community have pointed out many points where the author enforces stereotypes and misuses language. Which leads to the question, can and should a white woman who has never lived in Mexico write about a journey she has no experience of? It’s a tough question. She has referred to her husband’s past undocumented status in interviews but didn’t mention he is Irish, implying a personal connection to the story that she didn’t really have.

This opaque reference to cultural connections continued when she started to refer to her Latinx heritage (via a Puerto Rican grandmother) during the leadup to the publication of the novel. This is in stark contrast to her 2015 article with The New York Times, where she documents the devastating rape and murder of her two cousins and begins a paragraph with, “I am white.”

Diversity within publishing is a problem, one that’s being worked on but you can understand why some of the Latinx community are upset that Jeanine Cummins has reportedly earnt a seven-figure number from writing this book and selling the film rights, compared to genuine stories from Mexican authors who are continually struggling to be represented. If you’d like to read a review of this novel from someone who has been through the eyes of someone who fled El Salvador in the 1980s, I would urge you to read the Los Angeles Times article by Esmeralda Bermudez, who specialises in writing narrative stories about the lives of Latinos.

What Can I Do?

I loved reading American Dirt, but I’ve also been very grateful for the conversation it’s started. I enjoy reading fiction for the same reason many people do, to get an insight into other lives and with a hope to become more understanding and aware of the world around me. I like to think I read widely to try and accomplish this as best I can, and although I enjoy translated fiction (especially Japanese), it’s made me realise that I haven’t read much from the Latinx community; this is something I would like to change. If you have a favourite Latin American author or novel, I would love to hear about it in the comments below so I have some recommendations to get me started.

If you like American Dirt by Jeanine Cummins, you’ll love When I Hit You by Meena Kandasamy.

Thank you to Tinder Press for supplying me with a review copy of American Dirt.