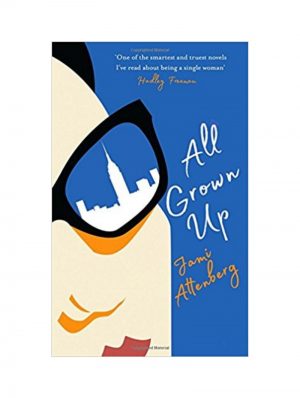 All Grown Up by Jami Attenberg

Jamie Attenberg, the New-York Times best-selling author, is back with her highly anticipated fifth novel, All Grown Up.

As a 39-year-old single woman, Andrea watches as her friends get married, have babies and then get divorced. She wallows in the job she never wanted as she sees her female friends climb their own career ladders. But what’s out there for a woman who doesn’t want kids, isn’t ready to ‘settle down’ and can’t even commit to her therapist, let alone another human being?

Convinced she’s only just keeping her head above water, a tragedy besets her family and for the first time in her life, she’s forced into being an adult.

“I’m alone. I’m a drinker. I’m a former artist. I’m a shrieker in bed. I’m the captain of the sinking ship that is my flesh.”

Unlikely female heroines are in fashion at the moment and All Grown Up gives us a refreshing take on this phenomenon in Andrea. She’s no anarchist, battling against what the system expects of her, she simply doesn’t feel like she fits into the world of marriage, children and ‘happily ever afters.’ She’s painfully aware of her own mistakes yet finds herself unable to stop repeating them. This usually consists of her sleeping with the wrong man or actually having real feelings for ones she can never have.

One thing that stood out to me in Andrea’s story, is the wealth of love she has to give, even if she hides it beneath a sarcastic exterior. Most of this love is given to the women in her life and it’s the lack of love given back that has broken her. For example, she grows up wanting to be an artist and the story behind her quitting her dream is quietly heartbreaking. She’s not in love with a man she dates but supports him, feeding him when he cannot support himself, regardless of their relationship ending. Too often, women in these types of roles are cast as ‘ice queens’ or ‘heartless bitches’ but this is most definitely not the case with Andrea.

Sharp, funny and caring, in just under 200 pages Andrea became a character I adored. If you enjoyed the BBC series Fleabag or Not Working by Lisa Owens then this needs to be your next read. All Grown Up is a sharp, feisty novel that will have you laughing out loud at the beginning and teary at the end. Everyone (whether we want to admit it or not) has been Andrea at some point in their life, feeling on the outside and looking in, we’ve all been in her shoes. I was sad to turn the final page on this messy, complicated and insightful protagonist but as this is the first novel I’ve read from Jami Attenberg, I’m lucky to have her entire back catalogue to indulge in. Fingers crossed I find some more characters like Andrea there.

If you like this, you’ll love Not Working by Lisa Owens.