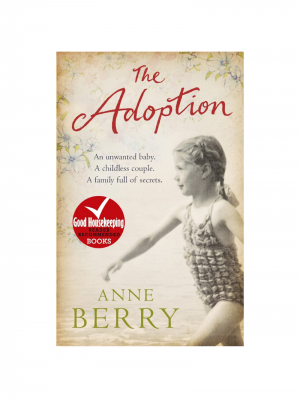 The Adoption by Anne Berry

Today I’m reviewing The Adoption by Anne Berry, published by Ebury Press. The Adoption is her third novel after The Water Children and The Hungry Ghosts.

The Adoption is written from the dramatically different perspectives of three women and reveals how their lives are intertwined. The first is Bethan, a teenager during the second world war who falls in love with a German prisoner of war who’s working on her parent’s farm. She falls pregnant towards the end of the conflict but her lover is threatened by her parents until he leaves and she is forced into giving her baby daughter up for adoption. The baby girl is then adopted by Harriet, a prim and proper lady who, after failing to conceive with her husband, decides to adopt. This way she believes she can pick and choose the perfect child in a similar fashion to perusing kittens in a pet shop. The little girl in question is called Lucilla. Taking after her biological mother, Lucilla has a love of animals, the outdoors and is no stranger to mischief and trouble. Which turns out to be exactly everything Harriet never wanted.

This evocative story of lies, secrets and identity contains as many characters that fill you with hope, as knot your stomach with anger. Paired with beautifully poetic prose that draws you right into their world, this novel is a delight to savour. A page-turner such as this does depend greatly on the stories outcome, which is also superb. With characters that linger in your mind long after you’ve finished reading, The Adoption by Anne Berry is one not to be missed.

If you like The Adoption by Anne Berry, you’ll love Instructions for a Heatwave by Maggie O’Farrell

Buy The Adoption by Anne Berry